The story of Alfie Best’s rise from a humble childhood to multimillionaire businessman reads like a modern-day fairy tale. Born into a Romany Gypsy family in 1970, Alfie started working at the tender age of eight, labouring and laying tarmac alongside his father. By 14, he was buying and selling vehicles and just a few years later, he already owned several mobile phone shops across London. By 2001, entrepreneur Alfie had made enough money to invest in his heritage, purchasing his first mobile home park in Romford – Lakeview Residential Park – for a significant £1.7million. Lakeview Park, with its 132 homes, is still one of the most popular parks in Alfie Best’s portfolio – the Wyldecrest Parks Group, now valued at over £230 million. As one of the most successful park operators in the UK, the award-winning Wyldecrest portfolio includes 52 residential parks for the over 50’s and six holiday parks offering homes for rent and sale. As the only ISO 9001 accredited operator within the parks sector, Wyldecrest Parks is also the only parks group to have nationwide coverage in 24 counties across England, Scotland and Wales.

The phenomenal growth of Wyldecrest Parks is undoubtedly a product of Chairman Alfie Best’s personal drive to succeed. Although numerous, his park investments are testament to quality over quantity with carefully chosen locations, safety and security provided by on site staff, and the highest operational standards. Saltmarshe Castle Park is a particular jewel in the Wyldecrest crown. Homes are set amongst the picturesque grounds of a former 19th century country house and estate close to the market town of Bromyard in Herefordshire. The original castle was demolished in the 1950s but parts of the outer walls and turrets remain, alongside several outbuildings and stables. All are being restored to their former glory to add to the park’s unique atmosphere. Saltmarshe Castle Park started life as a holiday park and was acquired by Wyldecrest Parks in 2015. It still has some 300+ holiday homes but the park is currently in the midst of a massive upgrade with 60+ residential plots being developed in the initial stage.

According to Alfie Best, Saltmarshe Castle Park’s many natural assets made it a natural choice for residential development. “The park’s premier location and its outstanding beauty are mpossible to deny, 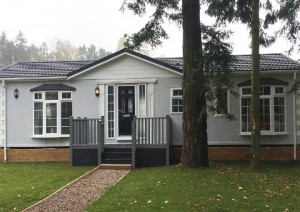 ” says Alfie. “It would have been a shame not to take full advantage of that. Now people can live in this astonishing site permanently, and enjoy its beauty full-time.” Out of the initial plots being developed in the Tower Court area of the park, more than half are ready to receive happy new owners, whilst further availability is limited, especially for those plots which offer exclusive and unrestricted country views.

Working your way to the top

If mentoring was as useful and concise and just so much plain fun, I would have done it much sooner in my life. Where in after a few years in the automobile industry I was at odds on what the next steps in my career would be, this exclusive mentorship program with Alfie Best helped me understand where I was going wrong & what strategic decisions I needed to take. I would say what Alfie Best is to mentoring as Cartier is to jewels!

He draws on his years of experience of running a world-class organization and has powerful ways to approach & solve even the most intractable problems. As you enter the world of Alfie Best you learn inside secrets and leave with a knowledge which can prepare you to go from problem to solution for most situations in your life.